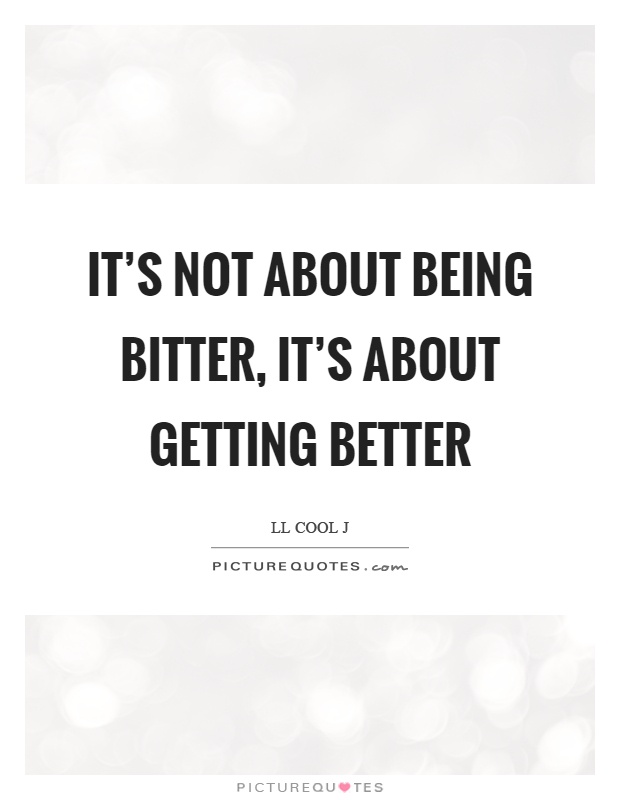 The concept of being bitter has been sitting on my mind for some time now. Since I had a conversation with someone who claims that they never get bitter EVER.

I don’t think it is possible to never get bitter even if it is in the slightest, minute way. I believe that you could be a very bitter person to even deny a human characteristic that everyone has the capability to possess. I’m not saying that bitterness lasts forever and I’m not saying it cannot be overcome. I’m saying that there might be a brief moment where you feel bitter but how you deal with it determines what sort of person you might be; bitter or better.

With everything I say, I could be wrong, I am not a scientist of any sort, especially not on human behaviour. I just have experience on my side and thoughts based on what I see on a daily basis.

Let’s define what bitter means, just to put it into context, I don’t want anyone thinking I am referring to a bitter tasting apple or anything like that. So what I mean is a person who is considered hateful, hostile, cynical and/or resentful. Ever felt these emotions at any point in your life? I think I have, you have and we all have.

Either from an argument, someone saying something nasty to you or who knows, you simply don’t like the other person’s vibe. I mentioned above that how you react and deal with it determines what sort of person you might be. I think if you are able to address the issue face-to-face that shows a great deal of maturity, but that doesn’t mean just walking up to the person shouting at them and then walk away, I mean, what would that solve? Absolutely nothing, instead it might raise the tension. I would suggest being civil and discuss the matter until everyone is on mutual terms, whatever those may be, even if you are no longer friends, that’s okay. Doesn’t that just seem like a better option? I say this because the issue at hand most likely concerns everyone so then I think it isn’t just about the person who raised the issue that should get better, as human beings we should help one another become better people. I have said this before (as I quote myself) “we might have been born into the world alone, but that doesn’t mean we should live alone.” I hope this makes sense.

Wherever you go, whomever you may meet. Aim to be better instead of bitter, because you never know when you might cross paths again.